Link to this page

Surprise!
Order a Hand-Painted Reproduction of this Painting 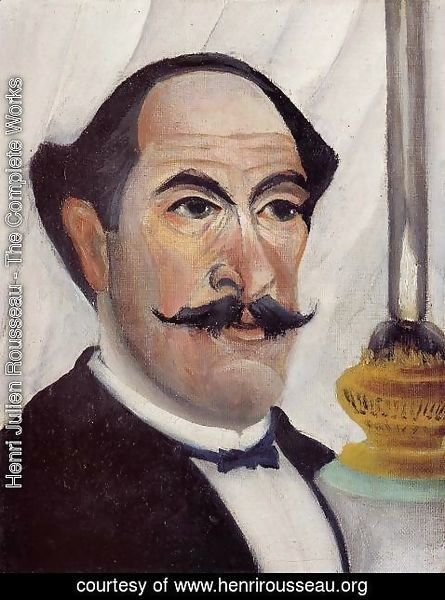 Henri Julien Rousseau was born in Laval in the Loire Valley into the family of a plumber. He attended Laval High School as a day student and then as a boarder, after his father became a debtor and his parents had to leave the town upon the seizure of their house. He was mediocre in some subjects at the high school but won prizes for drawing and music. He worked for a lawyer and studied law, but "attempted a small perjury and sought refuge in the army," serving for four years, starting in 1863. With his father's death, Rousseau moved to Paris in 1868 to support his widowed mother as a government employee. With his new job in hand, in 1869 he started a relationship with a cabinetmaker's daughter, Clemence Boitard, who became his first wife and he wrote a waltz bearing her name. They went on to have nine children but tuberculosis was rife at the time and seven died at an early age. In 1871, he was promoted to the toll collector's office in Paris as a tax collector. He started painting seriously in his early forties, and by age 49 he retired from his job to work on his art. His wife died in 1888 and he later remarried.

Rousseau claimed he had "no teacher other than nature", although he admitted he had received "some advice" from two established Academic painters, Felix Auguste-Clement and Jean-Leon Gerome. Essentially he was self-taught and is considered to be a naive or primitive painter. 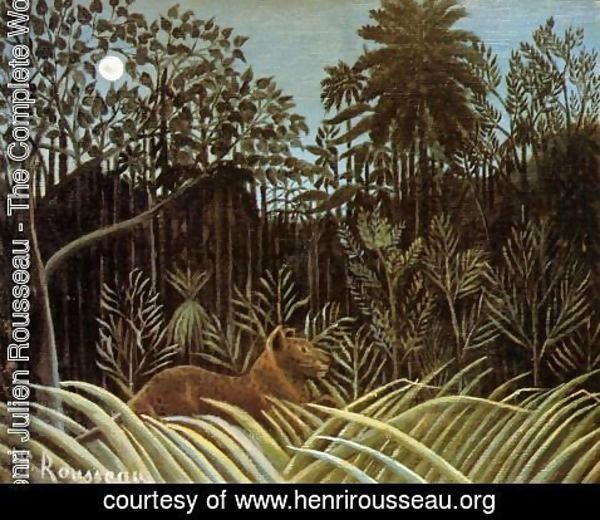 His best known paintings depict jungle scenes, even though he never left France or saw a jungle. Stories spread by admirers that his army service included the French expeditionary force to Mexico are unfounded. His inspiration came from illustrated books and the botanical gardens in Paris, as well as tableaux of "taxidermified" wild animals. He had also met soldiers, during his term of service, who had survived the French expedition to Mexico and listened to their stories of the subtropical country they had encountered. To the critic Arsene Alexandre, he described his frequent visits to the Jardin des Plantes: "When I go into the glass houses and I see the strange plants of exotic lands, it seems to me that I enter into a dream."

Along with his exotic scenes there was a concurrent output of smaller topographical images of the city and its suburbs.

He claimed to have invented a new genre of portrait landscape, which he achieved by starting a painting with a view such as a favourite part of the city, and then depicting a person in the foreground. 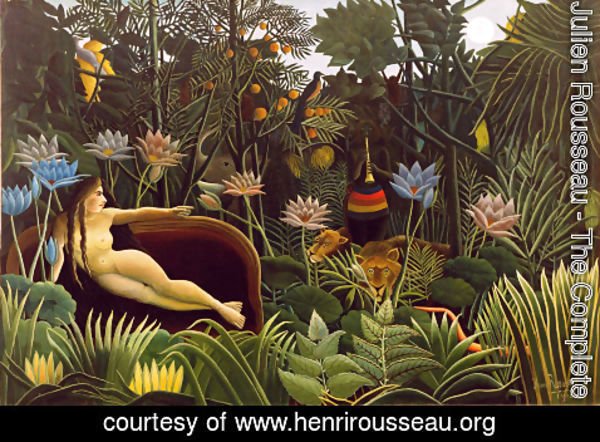 Rousseau's flat, seemingly childish style gave him many critics; people often were shocked by his work or ridiculed it. His ingenuousness was extreme, and he was unaware that establishment artists considered him untutored. He always aspired, in vain, to conventional acceptance. Many observers commented that he painted like a child and did not know what he was doing, but the work shows sophistication with his particular technique.

From 1886 he exhibited regularly in the Salon des Independants, and, although his work was not placed prominently, it drew an increasing following over the years. Tiger in a Tropical Storm (Surprised!) was exhibited in 1891, and Rousseau received his first serious review, when the young artist Felix Vallotton wrote: "His tiger surprising its prey ought not to be missed; it's the alpha and omega of painting." Yet it was more than a decade before Rousseau returned to depicting his vision of jungles.

In 1893, Rousseau moved to a studio in Montparnasse where he lived and worked until his death in 1910. During 1897 he produced one of his most famous paintings, La Bohemienne endormie (The Sleeping Gypsy).

During 1905 a large jungle scene The Hungry Lion Throws Itself on the Antelope was exhibited at the Salon des Independants near works by younger leading avant-garde artists such as Henri Matisse in what is now seen as the first showing of The Fauves. Rousseau's painting may even have influenced the naming of the Fauves.

In 1907 he was commissioned by artist Robert Delaunay's mother, Berthe, Comtesse de Delaunay, to paint The Snake Charmer.

When Pablo Picasso happened upon a painting by Rousseau being sold on the street as a canvas to be painted over, the younger artist instantly recognised Rousseau's genius and went to meet him. In 1908 Picasso held a half serious, half burlesque banquet in his studio in Le Bateau-Lavoir in Rousseau's honour.

After Rousseau's retirement in 1893, he supplemented his small pension with part-time jobs and work such as playing a violin in the streets. He also worked briefly at Le petit journal, where he produced a number of its covers.

Henri Rousseau died 2 September 1910 in the Hospital Necker in Paris. Seven friends stood at his grave in the Cimetiere de Bagneux: the painters Paul Signac and Otiz de Zarate, Robert Delaunay and his wife Sonia Terk, the sculptor Brancusi, Rousseau's landlord Armand Queval and Guillaume Apollinaire who wrote the epitaph Brancusi put on the tombstone:

Rousseau's work exerted an "extensive influence ... on several generations of vanguard artists, starting with Picasso and including Leger, Beckmann and the Surrealists," according to Roberta Smith, an art critic writing in The New York Times. "Beckmann's amazing self-portraits, for example, descend from the brusque, concentrated forms of Rousseau's portrait of the writer Pierre Loti". 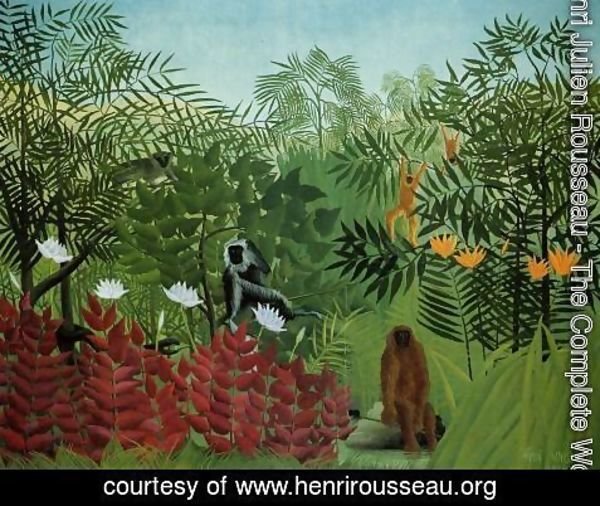 In 1911 a retrospective exhibition of Rousseau's works was shown at the Salon des Independants. His paintings were also shown at the first Blaue Reiter exhibition.

Two major museum exhibitions of his work were held in 1984-85 (in Paris, at the Grand Palais; and in New York, at the Museum of Modern Art) and in 2001 (Tubingen, Germany). "These efforts countered the persona of the humble, oblivious naif by detailing his assured single-mindedness and tracked the extensive influence his work exerted on several generations of vanguard artists," critic Roberta Smith wrote in a review of a later exhibition.

A major exhibition of his work, "Henri Rousseau: Jungles in Paris," was shown at Tate Modern from November 2005 for four months, organised by the Tate and the Musee d'Orsay, where the show also appeared. The exhibition, encompassing 49 of his paintings, was on display at the National Gallery of Art in Washington from July 16-October 15, 2006.

A major collection of Rousseau's work were shown at The Grand Palais from March 15 to June 19, 2006. (From Wikipedia)

Report an error on this page